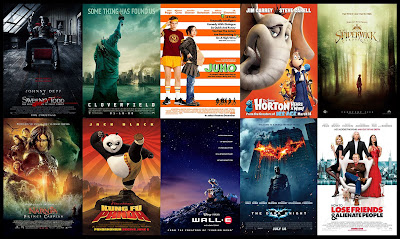 It was a really strange year, albeit a very morbid one too. And let’s be honest, it wasn’t a particularly great one either. There was the credit crunch, rising food, oil and gas prices, flash floods, and the property boom. IS NOTHING SAFE?! To take our minds off it all a lot of us caved in and spent our hard-earned cash on the most questionable form of entertainment – Mamma Mia! The Movie, which was the movie-goer’s answer to prozac, really.

It's time to gush with gleeful praise at the world of movies, the big cinematic outings of an acquired taste and age group that hit British screens in the past 12 months. I saw only 10 of them.

HOW TO LOSE FRIENDS & ALIENATE PEOPLE
This is more or less exploitative of the shallowness of fame, more of a rom-com later on, appealing to both sides of the Atlantic in terms of humour. Hilarity is never far away as the Peggster is likeable as the loathsome tabloid journalist who is notorious for his contemptuous interacting with celebrities. Megan Fox meanwhile plays a caricature of herself, although does she really sound like that? Overall, it’s a right good laugh, with dynamic performances and a great ending. I was especially happy to see a few familiar faces in the opening few minutes. (Those names are Katherine Parkinson, Thandie Newton, Fenella Woolgar, Chris O’Dowd, James Corden, Miriam Margoyles.)

THE SPIDERWICK CHRONICLES
Rather like Harry Potter and the The Goonies meet Jumanji. Because come on, does Thimbletack not remind you of Dobby? Similarities aside, how Freddie Highmore manages to pull off two distinct personalites in a single frame will blow your mind. There’s no doubt he will go a long way. Now I’m probably a bit old for the book series, but I flicked through them one time and loved the artwork. The theatrical adaptation was delightfully gruesome for its demographic. All that slashing, biting, spitting, scalding, stabbing –it’s anything a kid could want, one who enjoys wandering into the woods and finding something to poke with a stick. And for you film score fans: listen closely and you’ll hear the James Horner leitmotif.

THE CHRONICLES OF NARNIA: PRINCE CASPIAN
The follow-up to The Lion, the Witch & the Wardrobe is a little more bloodthirsty, with bigger, longer battles when there are only a few pages in the book. The spirited young cast yet again flex their acting muscles. I just wish they’d look more genuinely awe-struck by the fact that they once fought an evil Witch, team up with background extras from the Lord of the Rings and seek advice from a wise lion who speaks in a sexy Irish brogue. Kids, you’re not at school – you’re on a trip! There’s one scene that’ll give youngsters many sleepless nights from the menacing sight of a werewolf and a fugly hag. The sequence with the trees pummeling the Telmarines bares resemblance to the Ent's attack on Isengard from another aforementioned epic. Helm’s Deep much? Bottomline, the Narnia series are essentially Christmas movies, and that’s why this film was kind of snowed under at the box office.

CLOVERFIELD
JJ Abrams took a simple idea: giant kaiju attacking NYC - nothing new, but from an onlooker's p.o.v. gives the genre a fresh, personal perspective, one that is unmistakably post-9/11 and 7/7. Packed with unbelievable moments that stick with you, it delivers faux realism at its very best, topped off with Michael Giacchino's overture. The past and present are ingeniusly paced. Even if the characters don't captivate you, you're urging them to rescue Rob's girlfriend "and get the hell outta Manhattan!" I felt particularly sorry for Hud, even if his camera skills did suck. Thankfully they didn’t give me motion sickness. As for the main attraction, I only half-expected the creature to be hungrier, angrier, meaner, uglier, and less beefy. If there’s one thing we’ve learned, we all love Clover.

A film initially released in North America last xmas…
JUNO
Maybe it was little too ‘hipster’ for some, but I really felt for the strong female protagonist as the pressures of adulthood weighed on her. Oscar winner Diablo Cody has created a world where even the adults throw comeback lines at their minors. This adorable little gem from Jason Reitman has great performances and a down-to-earth, uplifting coming-of-age story that left a big stupid grin on my face. Ellen Page and Michael Cera, again, two young leads who will go very far.

A Golden Globe-winner also released last xmas…
SWEENEY TODD: THE DEMON BARBER OF FLEET STREET
I loved every ruby-dripping minute of this. Depp and Burton once again keep it all in the family as their rendition on the urban legend has a lush score and songs, dream cast, melodramatic gore, unexpected!Anthony Head and an electrifying revenge story. What more could you ask for? So why didn’t it deserve a sing-along? While I'm okay with slit throats, I would imagine this is no worse than the BBC dramatised version. You see, Musicals and Splatter Horror are like mice and spiders: mixing the two together isn’t going to be everyone’s ketchup and mayo. While it’s alright for some. Just watch The X-Factor.

I had to tie the next two…
From Dreamworks it’s…
KUNG FU PANDA
I got a real kick out of its near-the-knuckle action sequences and toongasmic intro/end credits, both of which scream Samurai Jack. It's rather like a comedic version of T’ai Fu: Wrath of the Tiger on the PlayStation – only with a Panda who probably has trouble wiping his down-belows – with gravity-defying martial arts and highly stylized CGI in which the animals move like animals, actors sound the part, and Tai Lung makes Sylar look like a pussycat. It would have been a pop culture reference too many, instead it’s just a hilarious pastiche on Zhang Yimou’s filmography. I wouldn’t rule out on sequels. Bring 'em on!

And from Pixar…
WALL*E
Heartmelting, thoughtful and suprisingly dark, it’s required viewing for kids, adults, animators, and anyone who will have great grandchildren. It'll make you think how precious our planet is, and make you sneer at every advertising reference. It’s amazing that you can still get away with body language and Oscar-worthy sound design to tell a good story. My favourite scene has to be when WALL*E and EVE – the most endearing pairing since Hiro/Ando - are flying around the Axiom ship. M-O also deserves an honourable mention, ‘coz he’s gangsta.

So how does it compare to the other likely contender for Best Animated Feature? Well, both these films charmed audiences with loveable characters and the awesomeness and heart of their genres, but I will say that WALL*E is more akin to staring up at a clear night sky where the suns of a million galaxies burn from many lightyears and beyond. Whereas KFP has the Wuxi Finger Hold…who can say no to that?

And now for the #1 cinematic experience of 2008…
Rarely does a film hold me on the edge of my seat as it lashes out at my mind, body and soul, until I’m left shell-shocked with awe and disbelief. I screamed not once, but twice. In my earnest opinion, it is The Dog’s Bollocks.

THE DARK KNIGHT
I mean, Holy Shit-Sauce, Batman! Editing and setpieces so heart-pounding, multi-layered plot twists so involving it makes every other film in any genre look amateurish. It’s a really well-crafted comic book crime thriller, and proof that sequels are undoubtedly better than the original. Undeniably grim, its purview covers the morality of human nature, a semi-realistic view of being the hero, and how the terrorists have fun ruining everybody else's. Anyone who’s seen this will bring it up in any conversation and the first thing they rave about is…

-The truck flipping over, or the Tumbler regenerating into the Batpod
-Harvey’s injuries, that weren't meant to be gross-out but were
-The Mayor of Gotham wearing guyliner
-Michael Caine racing past my house on Christmas morning in his underwear.

The latter really did happen. In a dream. No, I am of course referring to Heath Ledger. His magnetic performance as the impervious Joker was so deliciously creepy. With his chalky white face, panda eyes and the stench of evil rolling off his purple and green attire, this clown is an unpredictable death machine. One of his darkly comic highlights was his man-to-man with Harvey, which has to be the most bizarre combination of images and dialogue ever put on celluloid. Think about it: he’s a District Attorney, he’s a terrorist; he’s a burn victim, he’s a raving sociopath; he’s a changed man, he’s a man in drag…
Bottomline, this was the best birthday present I ever treated to my father to, and we would kill to see this in IMAX. Alas, we just never got round to it…never mind, don’t think I’m missing out on much…
"Oh you have no idea…!"

So that was 2008, but whatsay '09? Slumdog Millionaire, The Curious Case of Benjamin Button, Bolt, Watchmen, Ponyo on the Cliff by the Sea, Monsters vs. Aliens, X-Men Origins: Wolverine, Star Trek, Coraline, Terminator: Salvation, Transformers: Revenge of the Fallen, Ice Age 3: Dawn of the Dinosaurs, Public Enemies, Harry Potter & the Half-Blood Prince, Up, Where the Wild Things Are, A Christmas Carol, The Fantastic Mr. Fox, The Lovely Bones, Scott Pilgrim vs. the World, The Wolf Man, Avatar...