Wide awake with post-con blues and giddy glee, I felt like I had run a marathon. Convenient or not, I'm glad I came anyway.

The Road to ExCeL

The prospect of attending this convention was unlikely. Over £500 was already spent on a page in a lifestyle magazine that nobody in my field even reads. Saturday would be the least awkward day to travel, but by the time I received payment, it was too late.

Benedict Cumberbatch attended Richard III's Reinterment Service. That was when I accepted this was the only opportunity to at least see the guy and show him support. How often does a global star of stage/screen visit your hometown?

Exactly two weeks before Sherlocked, Naomi of Cumberbatchweb announced on Twitter that somebody was sparing a ticket. At that instant I punched “yes please!” Everything was set in motion. I can't thank Naomi and Monika enough.

A seat at Benedict's Talk was then secured. Indecision stalled extra choices. There were also monthly bills to take care of.

The date change of the London Animation Club event was a blessing. Travelling to/from ExCeL required an Oyster card. Took a selfie with the ad poster on the tube escalator. If anyone attempted such a challenge, you were rewarded with funny looks, serious vertigo and a badge for your efforts. Cherish it.

I joined the queue in Hall S7, exchanging other con adventures with Kirsty and Sera before being herded into the Main Stage.

Akin to a rock concert, Benedict seemed most in his element talking directly to the crowd. It was incredibly entertaining to hear his thoughts on Sherlock; character relationships; fellow cast members; how he approaches both big movies and little TV shows vice versa; dropping f-bombs; meeting Johnny Depp only as Whitey Bulger. This is a man still feeling his way through, mastering his craft. I have always been enamoured of him.

Now, don't ask me how...but the moment finally arrived. Although I've never had a problem with public speaking. The ultimate test was asking a coveted actor about his process, and applying it to my own.

My amplified voice was oddly disembodied. He scanned the audience to find me smack-bang in the middle. This wasn't even staged. “So good to see you,” I continued. “What I would like to know is... (reading from notes as it was too long to memorise) For each character you play or have played in any medium, how do you bring together your research and life experiences to deliver a unique performance and interact with other actors?” And then threw in at the last-minute, “also can you give us a little...bit of...dragon voice please?” 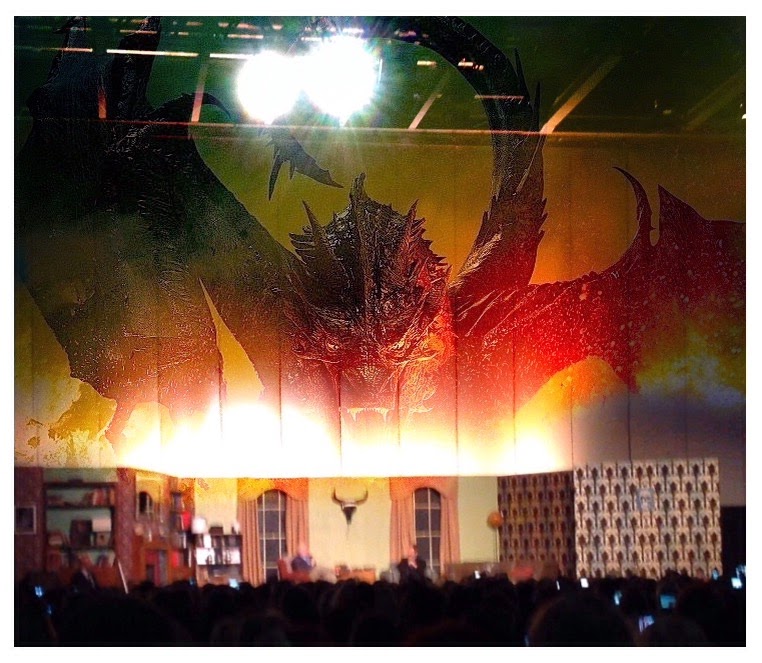 It had been a long while since going to a convention. I was reminded why I love it so much - a succession of random surprises ensue. Examples: for a toddler this was his first Con-going experience; one girl cosplaying as Irene Adler in barefoot wore only a coat; and while waiting for the Sherlockology panel, a boy I recognised as Louis Moffat approached the entrance. I excitedly told him I loved the charming interview he did with his parents. When asked if it was something he wanted to get into, he said it was more of a one-off.

Sue Vertue talked about her role as producer on Sherlock 1-3. I asked her, “What audience did you have in mind around the time of the pilot and A Study in Pink?” She said initially they were aiming for BBC Two; ultimately half the demographic were female, and Hartswood naturally skewed toward a young audience; her background in comedy helped – I squeed “YES!” when she mentioned Gimme Gimme Gimme as my sister loved that growing up.

This Reichenbach theory is... 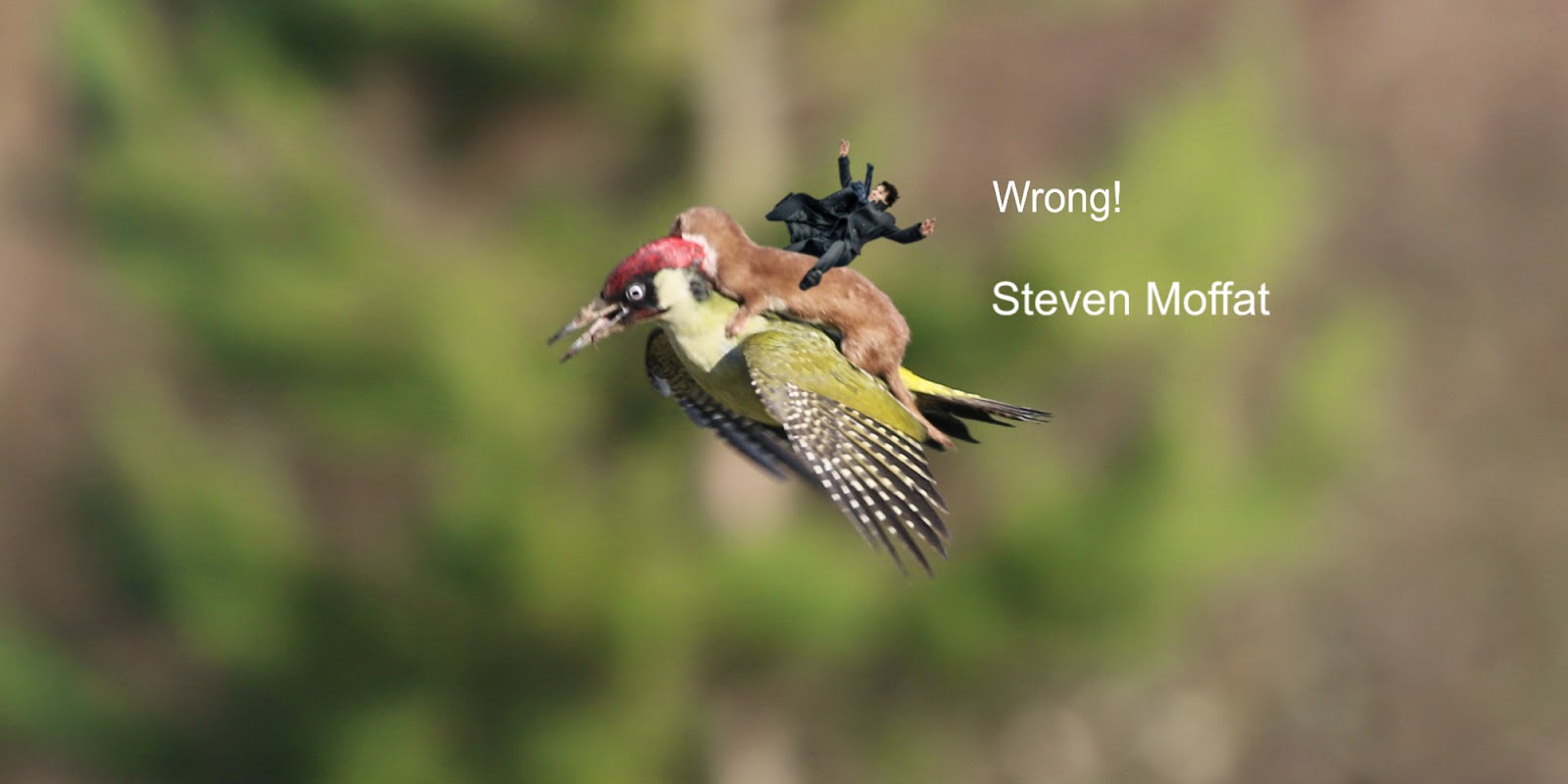 I literally got my hands dirty at Real SFX's display. These cats deservedly won the joint TV Craft award for VFX the following day – the visuals in Doctor Who series 8 are the best.
Danny Hargreaves showed us fake blood you can eat, raining debris, the science of exploding bullet holes, ice old snow, rubbery thermoplastic that stunt performers smash through... Glorious practical FX.

The Door and Living Room were expertly and lovingly assembled as they are in the show. It took three times to fully confirm that yes that is the actual 221B set from Bristol. Apparently the adorable Arwel Wyn Jones had seen the aforementioned meme; we talked Wales and wallpaper, and I even showed him my Sherlock-related fan art. 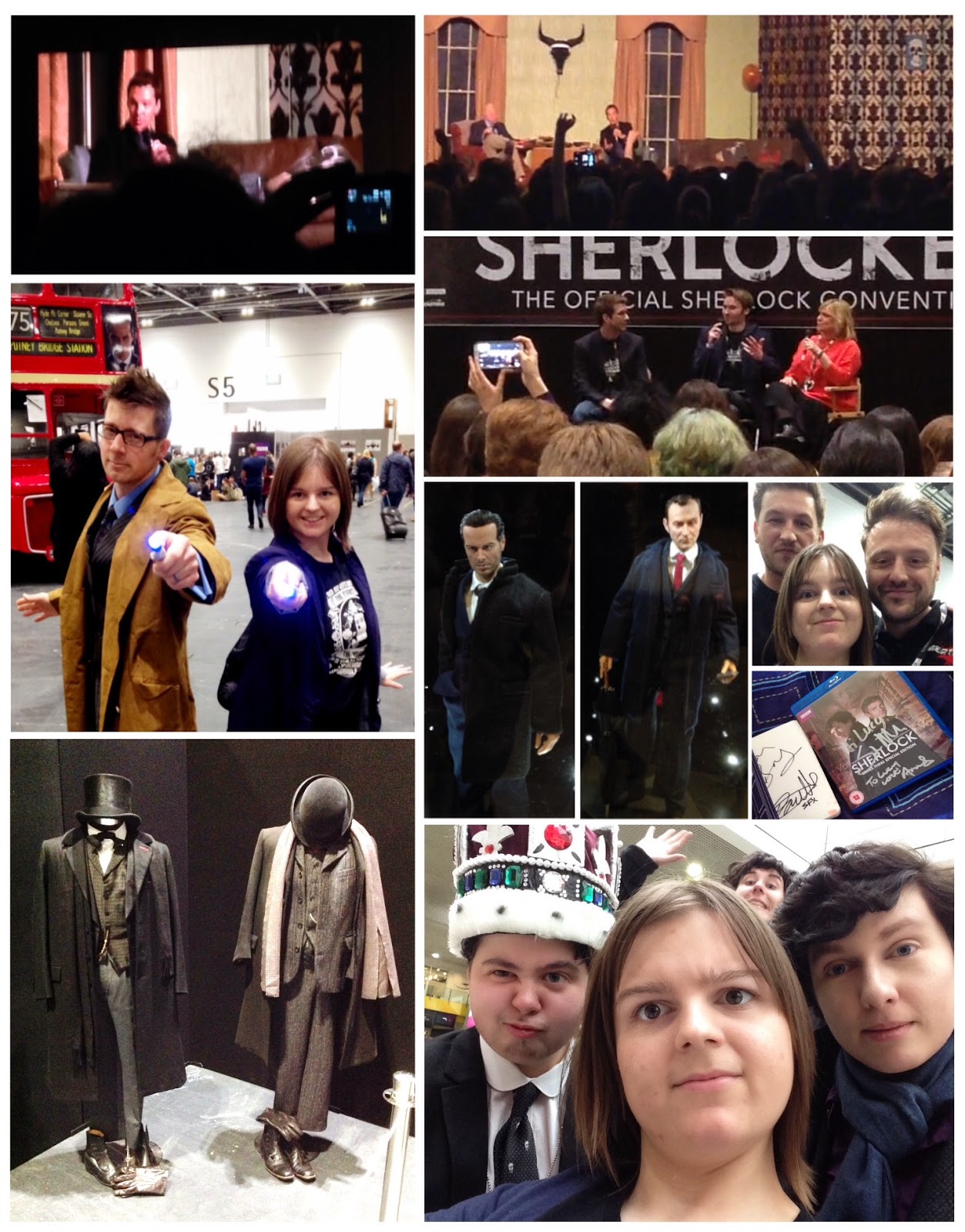 The museum teased the costumes from the Special.

As well as being unable to locate Monika around the Con, I also deeply regret not meeting the other guests. Briefly spotted Jonathan Aris, Lars Mikkelson, Una Stubbs, but never had the chance to go up and greet each of them. Saw Mark Gatiss and Andrew Scott...in toy form. Martin Freeman was there too, in spirit.

I didn't want the Con to end. It was best not to fight clashes and just relax, process everything and top-up on lunch. The lines were long and would take up the small amount of time and cash. I did however purchase Series 3 on blu-ray, as I didn't have anything for Steven or Arwel to sign besides a TARDIS notepad with Sam Bailey's auto inside, which Danny was happy to sign.

Word had spread that Benedict looked less than happy – the truth was he had a cold.

There was a moment when he was escorted to a photoshoot cubicle. We made eye contact. Both said hello, but the guard prevented any high-fives. Awkward, but in those familiar eyes I saw a sensitive soul fighting a gruelling schedule and winning. While bunged up? That makes him thrice more badass. Later I glimpsed the 221B lounge shoot towards the end to check if he was okay.

Like the show I savoured every minute of Sherlocked. I'm reliving it again reading the stories and quotes. It was a joy to discover and connect with fans from different backgrounds. I'm sorry for the many who couldn't attend and especially sorry for those few underwhelmed by the overall experience. Hard to argue with the expenses though. Just be grateful that most of the cast spent the weekend with you. We are all one big extended family.

Plans for 2016... Listen up Showmasters/Massive Events:
We will all be fresh from the Special and Series 4, spilling more credible and ridiculous theories and cracking jokes with those mad geniuses. Blame/praise them for bringing these gentlemen and women into our lives.

Immersing myself in passions and travelling distances are fuel for the creative soul. It can be terrifying and I am bound to make mistakes, but my communication skills improve.

There has been a Human League ballad swimming around in my head, since speaking to the mighty Cumberbatch, who is just a man. I fully 100% respect him now. As is the case with every star or writer I meet, I get a sense of their vulnerability. He dedicated a whole day to the fans. He is THE man and he deserves a nice long break and warm chocolate with his wife Sophie.

The whole thing has given me validity to make my animated short film; the missing piece of the puzzle has been found.