I will look back at 2012 with fondness and no regret. 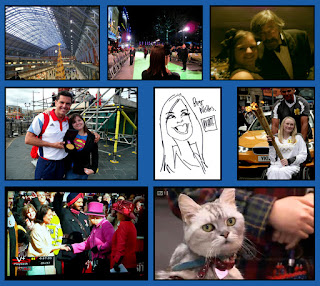 The best moments were sharing space with some influential, inspirational people and animals, and making plenty more friends. Making them happy. Dreams becoming reality – Mum got a new fireplace installed. Achievements were gained through faith, trust and perseverance, and also patience. Through all the missteps and good times, those defined where to start and stop. Like, is there something I want to express in the only way I could? What is driving me in this direction? What do others expect from me? What's getting them down?
Let's start with what was undoubtedly the BEST Christmas gift ever. The whole of December was Christmas, mostly because of the unforgettable London adventure. The closest Kat and I will ever get to a jolly good Dickensian Christmas, with a Tolkien twist. The Royal Film Performance of the first part of the Hobbit trilogy, thanks to Bluffers Guide; walking the (green) carpet; meeting Stephen Fry; a cast member or two and Alan Lee; riding around Soho in a rickshaw, YOLO and all that.
The following morning, we visited Double Negative's new home at Great Portland Street, strolling past RADA and UCL on the way. Paul Franklin (award-winning VFX supervisor on Inception) took us on a tour of the atrium, the storage infrastructure in the basement and the dailies rooms, and we even bumped into fellow sup' Andy Lockley. We even had breakfast and I showed my portfolio to Paul, while he gave advice on pitching and how to make an impression on producers. We also talked alternative names to shows – working title for The Dark Knight was 'Rory's First Kiss' – Man of Steel, to which I flashed my Superman tee (always wanted to do that in a post-production house), why VFX is srs business, and the pros/cons of HFR. Before we left I congratulated him on The Dark Knight Rises and wished him success.
The last stage involved getting lost in Carnaby St., browsing toy/chocolate/Rolling Stones shops, finding StudioCanal - Alexandre Desplat's music in the ident is pure eargasm - finally reaching Covent Garden, before racing back to St Pancras via the Piccadilly Line against the clock. Damn that long-ass staircase.
Throughout 2012 I was opened up to the LittleBig world of networking, which I love as much as Chinese buffet, thanks to FD2D, DMU and Creative Coffee. I am now working on a couple of charity projects, including along with fellow postgrads a national project raising awareness of mental health. Stephen Fry, a supporter, will occasionally mention the rethinkyourmind.co.uk project on Twitter.
It was also amazing to be part of Aniscape Animation Festival, at Phoenix Square in March. Teaching schoolchildren how to use the zeotrope, watching Leo Bridle and Mohan Subra talk about their processes, being interviewed on Citizen's Eye.
I'm taking the imminent jump into the job market one brush at a time. I joined LinkedIn in June, eventually landing a job at an agency. Connections are growing, while I've been meeting more public figures in person.

New Walk Museum have exhibiting a collection by German photographer August Sander; his grandson Gerd curated, and was there to launch the gallery on preview night. One bit of advice he gave was, digital tools only facilitate the process, while traditional cameras are just as practical and relevant today.
The Welsh champions including cyclist Mark Colbourne were about to gather at the Assembly in Cardiff. Mark let me stroke his Paralympic Gold medal. Preciousss...
It was either reading 'You Can Get It If You Really Want' or Usain Bolt's success that got me licking Reggae Reggae Sauce on my lips. I also dig cranberry and mustard in everything, but that's another story. Levi Roots made an appearance at the Food Enterprise Workshop in Leicester Market, talking to young chefs about running a business. Super nice guy. The event cheered me up right after a potentially soul-crushing presentation at uni.
San Antonio-born Todd White made an appearance at Whitewall Galleries in Highcross. An expressionist style painter, he was the lead character designer on SpongeBob in the late 90s, and sketched a caricature of yours truly.
It was incredibly exciting meeting a cat who holds the record for the loudest purr. Just featured on a programme about Guinness World Records – narrated by Gene Hunt! – Smokey and her owner Ruth were at Waterstones signing copies of her pawtobiography. Yeah.
The Olympics and a Michael Fassbender appreciation phase – fueled by a rousing conversation with my sister – helped me survive the long summer. Got around to completing a 2 month work-based learning course set up by the godsend that is Seed Creativity.
It was a pleasure watching the Olympic Torch Relay and being in the presence of the Queen at the start of the Royal Family's Diamond Jubilee tour. That was definitely worth the 4+ hour wait; the glimpses, the dancing, the flower collection at the end.
The cultural highlight other than the Olympic Games for me was Sherlock series 2. It's about as close to perfection as TV can get. I love this show like I love visits to National Museum Cardiff. The design, the cinematography, the writing, the acting, the music. I want more, so I can gush and shout and speculate and gush all over again. I love it. I want to go to bed with it, and kiss it in many soft private little places.
Adventure Time is another show that took a bit of time for me to go from liking to full-on loving. Actually influenced the look of my latest designs/sketchbook drawings. Everybody in that show has a face like this c: What's not to love?
Here's where I try to pick the movies I saw in 2012 (including home releases). I decided to single out An Unexpected Journey because of reasons. I was hoping to see this movie in the best way possible. What a fantastic experience it turned out to be.
Life of Pi closed the year as what could be one of my personal favourites. A proper children's film, along with Beasts of the Southern Wild. Both films, while bleak, have perspectives on faith, nature, the logic of things, and the triumph of the imagination. To survive, adapt, and wait for the whole thing to blow over.
Few movies made me laugh as hard as Ted did. Also hugely entertained by The Cabin in the Woods. Arrietty, Midnight in Paris and Moonrise Kingdom were all wonderful gems, more than just notable blu-ray/DVD rentals. Chronicle! How could I forget? As much as I really liked The Avengers and The Dark Knight Rises, Chronicle sent me flying high into the air. War Horse and The Artist oozed with nostalgia. Likewise, The Pirates! In an Adventure With Scientists burst with creativity. I believe the Pirate Captain's beard is made of chocolate. The Pirate With the Scarf? Cutest puppet ever. Dug the double feature of Prometheus and Brave, in 2D no more no less. Both films have beautiful moments and big ideas. What blew my mind and made me gigglesnort that echoed through space, was that Shaw and the android share my parents' names.
In general it was tough adjusting into an adult. Defaulting to all-bran cereal was just as disheartening. I got better. I wrote a book. Thanks Mum.
2013 is the start of something bright. With support, production will begin on a short film. Deadlines will be met for that as well as other side projects, when Creative Cat FX kicks off. I will be careful what I say and do, and not be a clutz. The perks of a trained working professional, with enough time on my hands, means more London adventures. Heck, I'd travel more thanks to the redspottedhanky service. Also, Star Trek Into Darkness, Man of Steel, Pacific Rim, and The Desolation of Smaug need to be seen on a big-ass IMAX screen.
To all of you, a Happy New Year. Hope your dreams become a reality too.
Posted by Lucy Crewe at Wednesday, January 02, 2013